This innovation contract with a pilot assignment gives Proton the opportunity to conduct a feasibility study. It is being investigated whether it is technically and economically feasible to build a green ammonia plant with the aim of locally producing 8,500 tons of green ammonia per year at SABIC’s production location, Bergen op Zoom.

SABIC Bergen op Zoom produces hydrogen as a by-product of chlorine production without releasing CO2. This hydrogen is formed from water by electrolysis and can therefore be considered green. Currently, the hydrogen produced is incinerated, after which the heat is (largely) reused in processes. SABIC is looking for a more sustainable solution for the use of hydrogen and has issued a challenge for this. Hydrogen is an important raw material for ammonia (NH3). In addition to a fertilizer, ammonia is also an energy carrier, NFuel.

“Ammonia is not only a fertilizer raw material, but also a good energy carrier. After years of discussion about the use of ammonia as an energy carrier, there is an increasing tendency to use ammonia in various fuel applications, such as marine fuel and fuel for the automotive industry. The technology of Proton is seen by SABIC as a possible solution to their energy challenge, where we expect this technology to be able to use their surplus hydrogen at an attractive market value and at the lowest cost. Proton wants to realize an 8,500 tonne NFuel plant on site of SABIC, where the sale of ammonia can ultimately be sold to the fertilizer and/or energy sector”, says Hans Vrijenhoef, CEO Proton Ventures BV.

Vrijenhoef indicates that the energy content of 8,500 tons of NFuel corresponds to 80 GWh and approximately represents the use of electricity in approximately 20,000 households.

During construction and commissioning of the NFuel plant, part of it is also returned as green ammonia to an existing fertilizer producer in the initial phase. This ammonia is produced without the CO2-emitting steam methane reforming (SMR) technology that is responsible for many CO2 emissions worldwide. Therefore, no natural gas is used in this process. 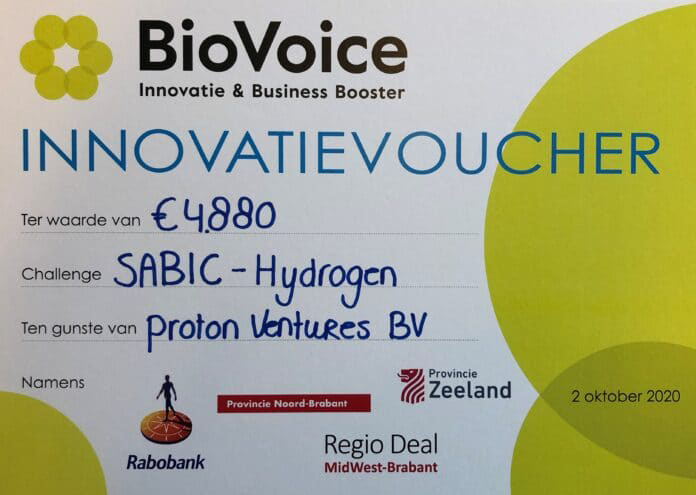